In the world of improvised music, so-called supergroups sometimes feel almost quotidien. After all, there are so many remarkable artists in the space and understandably, they often want to collaborate.

Yet the group that acclaimed pianist and composer Myra Melford has assembled here — with Mary Halvorson on guitar, Ingrid Laubrock on soprano and tenor saxophone, Tomeka Reid on cello and Susie Ibarra on drums and percussion — invigorates that tired cliché with fresh meaning. Each has an impressive catalog as a bandleader and collaborator, and Melford had worked with all of them previously, but never together. The result is a gathering of some of the most compelling improvisers working today.

The idea to create the ensemble occurred to Melford while planning a June 2019 residency at The Stone, the storied New York avant-garde venue. “It just felt like there was a lot of potential for good chemistry,” she says. The response to the quintet’s debut, one-off performance, a minimally rehearsed amalgamation of composed ideas, text directions for interaction and collective improvisation, was so enthusiastic that Melford was asked to record and tour with the music and this new ensemble.

The COVID-19 pandemic put a damper on the initial recording and touring plans, but Melford used the delay as an opportunity to expand what’s become a sort of suite. The concise, potent recording was eventually made at Firehouse 12 Studios in New Haven, Connecticut over the course of about a day and half. Although the release sounds whole on its own, Melford says it will continue to evolve and be further expanded for an upcoming tour.

It is also what Melford calls the “first installment” of a multi-part project inspired by the work of Cy Twombly. Twombly’s art has been a touchstone for Melford for years. Seeing a 1994 retrospective at MoMA made her want to dig deeper into his process, as she sought to further refine her own.

“I read that when Twombly was a young artist, one of the things he did to train himself was to turn out all the lights at night and draw in the dark,” she recalls. “He was interested in what it felt like to make the line more than what it looked like, and that seemed like an apt metaphor for how I play the piano. For me, it's all about the gesture and the energy. Of course, there's a sound to it, but it's almost as if the sound is the information I get after the impulse to make a gesture.”

That visceral, urgent quality is instantly obvious in For the Love of Fire and Water , as it is throughout Melford’s vast oeuvre. Yet like the collection of Twombly drawings, Gaeta Set (for the Love of Fire & Water) , from which the album takes its name and inspiration, the recording tempers all that gesture and feeling with an astute editorial eye — purposefully using provocation and cacophony to abut quieter sounds and blank space. The result is grounded, with the organic, elemental ideas that Twombly sought to portray coursing through close to the surface. In the album’s crescendos and calm, listeners can also feel the tempestuousness, power and unpredictability of the natural world — themes that Melford also traces back to her pilgrimage with the Huichol Indians of Mexico, recalling their belief system, and how it’s centered on the idea that “they live in a divine and sacred landscape,” as she describes it. Melford visited Gaeta, the small coastal town in central Italy where Twombly made “For the Love of Fire and Water.” “I was mesmerized by watching the sunlight on the water,” she says. “My sense is that's what he was drawing, the different ways that the sea and the sun interact.” Yet that collision is just one of the many ideas behind this project — while Melford hopes that listeners can see the drawings, and even plans to project them at some performances of the work, she stresses the project is hardly a literal interpretation of either Twombly’s drawings or the earthy concepts in their title. Instead, they are more like reference points for a work that thoughtfully combines each improviser’s distinct aesthetic in service of an ever-intriguing whole. The ten movements accompany ten of Twombly’s drawings. From the first, in which each member of the quintet plays with ideas about repetition with intentionally overlapping solos and melodic ideas, to the fourth, which features an elegiac unison melody that Melford likens to a foggy day and Ibarra playing detuned Filipino gongs — “The goal was for everybody to color the notes, the timbre and the attack differently each time they played it,” Melford says — to the eighth, in which the solos were recorded over an asymmetrical, hand-clapped beat, each is pointed and distinctive with a diffuse, shared spotlight that makes the ideas of every improviser really sing.

Melford’s vibrant, rich soloing grounds the project, offering bassy grounding quality at times and overwhelming sound and feeling at others. Reid’s cello is both romantic and pleasingly abrasive, while Halvorson’s glitchy guitar can be urgent or ethereal depending on the track. The album’s ending, what Melford describes as a chorale, ends with the pianist and Halvorson carefully fading out while playing sweet abstractions, like a sun slipping behind a horizon.

The force and purpose of this album is characteristic of Melford’s work, which she continues to create at a prolific clip while working as an educator — a pace that she says comes from simply wanting to learn more. “I want to get better at this, and I want to expand what I can do,” says the former Guggenheim fellow and Doris Duke Performing Arts Award recipient. “It's partly driven by this feeling like, ‘Well, I haven't really gotten it yet,’” she concludes, laughing. In this particular attempt at getting it, Melford partnered for the first time with a group of musicians who happen to all identify as women — a dynamic that the bandleader has found herself seeking out more often in recent years. She is a member of two all-women trios, Tiger Trio with flutist Nicole Mitchell and bassist Joëlle Léandre, and MZM with koto player Miya Masaoka and electronic musician Zeena Parkins. “Coming up as a woman in this music, it felt important to show that I could play with anybody and not put myself in a box,” Melford says. “But as I’ve gotten older, it’s felt more important to support both my female-idenitfying students and peers. So I thought, if I can put a great band together that happens to be all women, why not?” Thus, a new — and hopefully enduring — supergroup was born. 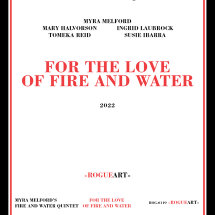 For the Love of Fire and Water

This feels like the beginning of an exciting new chapter for Melford.