Throughout her life in music, the pianist and keyboardist Myra Melford has pursued a creative vision that is both wholly distinctive and all-embracing. Composition and improvisation interact seamlessly and ingeniously in her work, one side strengthening the other. Guided by that same compelling spirit, divergent idioms and eras coalesce—from jazz, blues and global folk styles to various corners of the classical tradition and the avant-garde. Extramusical influences—for instance, the poetry of Rumi or the spirituality of Indian meditation, yoga and the Huichol Indians of Mexico—have also figured into the mix. In the end, Melford’s efforts are probably best served by labels like “contemporary music,” “new music” and other tags that signify artistic freedom and daring more than any boundaries of genre.

A look at Melford’s current schedule bears out these notions of openness and imagination. Since it premiered in 2012, her quintet Snowy Egret has featured several of today’s most brilliant improvisers—cornetist Ron Miles, guitarist Liberty Ellman, bass guitarist Stomu Takeishi and drummer (and MacArthur Fellow) Tyshawn Sorey—taking on Melford’s challenging yet often exuberant music. On two acclaimed releases, 2018’s The Other Side of Air and the band’s 2015 self-titled debut, a vast swath of concepts and strategies are in play: Hard-angled counterpoint, grooving rhythms, free playing, beautiful melody and harmony, through composition, swing and other elements appear and then dissipate, as the ensemble reconfigures in varying combinations and digs into the material with an intuitive sense of interplay. “There’s a lot of trust,” Melford says, “and there’s a lot of willingness to let go of what was supposed to happen and go with what is happening in the moment.”

In Tiger Trio, with flutist Nicole Mitchell and bassist Joëlle Léandre, Melford probes the depths of free improvisation, delving into each and every aesthetic between the meditative and the fierce. Another triumvirate of fearless female improvisers, MZM, features Melford on acoustic and prepared piano, Miya Masaoka on koto and Zeena Parkins on electric harp and electronics; their self-titled debut came out in 2017. The prior year, Tiger Trio offered Unleashed, and Melford and the clarinetist Ben Goldberg introduced Dialogue, a stunningly versatile document of their ongoing duo collaboration of the same name. Melford continues to grow in concert as a solo pianist, a discipline she began exploring in earnest after the release of 2013’s penetrating Life Carries Me This Way.

Beyond her life in the studio and onstage, Melford has become a dedicated and influential educator. She relocated to the Bay Area from New York in 2004, to join the music department at the University of California, Berkeley. Over the past 14 years, as a Professor of Composition and Improvisational Practices, she’s pursued a philosophy that honors jazz and new-music traditions while emphasizing ongoing developments in musical technique, theory, technology and performance.

That desire to showcase the musical future—artists who are not only refining jazz and creative-music language but actually redefining it—has also marked Melford’s contributions as a curator and presenter. In 2013 she received a Doris Duke Residency to Build Demand for the Arts, via San Francisco’s Yerba Buena Center for the Arts. There, she facilitated forward-looking events like the New Frequencies Fest and her own “Language of Dreams,” inspired by Uruguayan writer Eduardo Galeano and incorporating multilingual narration, dance and video facets. Melford had shaped a similarly ambitious interdisciplinary project, Knock on the Sky, at the Walker Art Center in Minneapolis in 2006. Currently she’s expanding the scope of programming at UC Berkeley-based organization Cal Performances. “The idea is to really bring the jazz programming at Cal Performances into the 21st century,” she says, “and start to bring in musicians who I think are more at the leading-edge of the music.”

That sort of idiom-bending ingenuity—which has garnered Melford fans from the worlds of jazz, contemporary classical and the avant-garde—has been a through line in her musical life. Born in 1957 and raised near Chicago, Melford’s early tutelage included both classical training and the Windy City blues and boogie-woogie she absorbed through her first piano teacher, Erwin Helfer. She became introduced to jazz during college, in Olympia, Washington, and later studied under Art Lande and Gary Peacock in Seattle before heading east. Based first in Boston, she took ear-training lessons with Ran Blake and prepared for graduate school at the New England Conservatory. Though she applied to and was accepted into NEC, Melford chose instead to venture to New York. Once immersed in the city that nurtured Cecil Taylor, Ornette Coleman and her other avant-jazz beacons, she started making her own vital contributions to the burgeoning Downtown scene.

In these formative years she participated in a workshop and other situations with Leroy Jenkins, which allowed her to engage directly with the AACM legacy whose impact on Melford was life-changing. She also studied piano with Jaki Byard and Don Pullen, studied composition with Henry Threadgill, another of her absolute creative lodestars, and began a decade-long tenure in ensembles led by “Conduction” innovator Butch Morris that included European tours and inventive theatre works in New York. In projects led by Fred Frith and in John Zorn’s game pieces, Melford furthered her abilities and understanding as an improviser. In 1989, a solo performance, “Some Kind of Blues,” masterfully blended her Chicago roots with aspects of the classical and jazz avant-gardes and was included on Volume Two of the Knitting Factory’s influential live compilation series.

Although Melford had gained some experience in small-group dynamics through Jenkins’ workshop, and had developed a powerful rapport with her early duo partner, flutist Marion Brandis, the pianist’s first real working band was the trio that appeared on her leader debut, Jump, in 1990. With Lindsey Horner and Reggie Nicholson, Melford established a searching, democratic take on jazz piano-trio language that she continued to investigate over three more albums and a robust touring schedule. Melford formed her Extended Ensemble by adding alto saxophonist/clarinetist Marty Ehrlich and trumpeter Dave Douglas to the trio, and that lineup released Even the Sounds Shine in 1995. By then Melford had already begun thinking about new ensemble formats and personnel that could bring to life her progressing ideas about composition—particularly her concepts bridging exploratory jazz and chamber-ensemble terrain. That vehicle ending up being the Same River, Twice, featuring Melford, Douglas, Chris Speed on saxophone and clarinet, Michael Sarin on drums and cellist Erik Friedlander, whose flexible instrument could fulfill bass functions or act more melodically alongside the horns. The band released a self-titled album in 1996, following it up in 1999 with Above Blue.

Also in 1999, the collective trio Equal Interest, with Melford, Jenkins on violin and viola and Joseph Jarman on alto saxophone, flute and oboe, released a self-titled album. Equal Interest, to which all three members contributed compositions, enabled Melford to continue delving into her idea of chamber improvisation, in the company of musicians she considered mentors and heroes. The band came to be after Melford met Jarman through her membership in the Musicians of Brooklyn Initiative (MOBI) and began studying aikido at his dojo in the borough. On the pathway to another of her landmark working groups, Be Bread, she released albums by Myra Melford’s Crush, with Takeishi and drummer Kenny Wollesen, and Myra Melford and the Tent, a quintet featuring Speed, Takeishi, Wollesen and trumpeter Cuong Vu.

A 2000 Fulbright scholarship provided Melford with the opportunity to study the harmonium in North India for nine months, and that journey informed the early music of Be Bread, whose 2006 debut, The Image of Your Body, presented the lineup of Melford, Takeishi, drummer Elliot Humberto Kavee and either Vu or guitarist and banjoist Brandon Ross. It also helped to blueprint the midsize ensemble vocabulary that can be heard today in Snowy Egret—particularly Melford’s desire to obscure the barrier between composition and improvisation, in the process upending previous jazz-ensemble conventions about solo order, interpretation of the melody and more. While Be Bread worked live in divergent sizes and formats, its 2010 album, The Whole Tree Gone, was written as an acoustic suite for sextet—Melford, Vu, Goldberg, Ross, Takeishi and drummer Matt Wilson—after the composer received a commission from Chamber Music America’s New Jazz Works program. Almost concurrent to Be Bread, Melford performed with Trio M, the egalitarian unit of Melford, Wilson and bassist Mark Dresser. As in Equal Interest, all three members wrote for the group, and as with Melford’s premiere piano trio, Trio M strove to reach new levels of parity and communicative intuition for an improvising collective. Scattered throughout her 20-plus-album discography are stirring duo sessions with Han Bennink, Marty Ehrlich, Tanya Kalmanovitch, Satoko Fujii and the Australian pianist Alister Spence. Melford and Spence’s 2014 collaboration, Everything Here Is Possible, won the Australian Art Music Award for “Excellence in Jazz.”

Along the way, Melford has received some of the most prestigious honors in contemporary music, including numerous DownBeat poll placings, a 2012 Alpert Award in the Arts for Music and, in 2013, a Guggenheim Fellowship and the Doris Duke Performing Artist Award (in addition to the aforementioned Doris Duke residency). In 2016, Snowy Egret was named Midsize Ensemble of the Year in the Jazz Journalists Association’s annual Jazz Awards. More recently, Melford was commissioned by the San Francisco Contemporary Music Players to helm a largely improvisational 30-minute piece for an 11-piece ensemble, electronics and Melford as soloist; the work will be premiered in May of 2019.

Melford’s press has been plentiful and glowing. The New Yorker called her “a stalwart of the new-jazz movement”; the New York Times wrote that she was “justly regarded as a fixture of the avant-garde”; and the Guardian described her as “a gifted descendant of the high-density Cecil Taylor school,” invoking one of Melford’s most profound influences.

Perhaps most essential, Melford has garnered the greatest respect from her peers throughout the experimental scene, chamber music and jazz, whether progressive or tradition-minded. The fall of 2017 saw the release of Handful of Keys, an album by the Jazz at Lincoln Center Orchestra with Wynton Marsalis, on which Melford joins fellow piano masters like Joey Alexander and Helen Sung. The collection includes a big-band arrangement, by JLCO saxophonist Ted Nash, of the Snowy Egret tune “The Strawberry.” “Myra is a true original, both as a composer and a player,” Nash says. “I have been a fan of hers for a long time, and I think this composition is the quintessence of Myra herself: serious yet fun, and always completely surprising.” 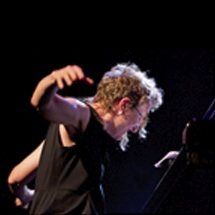 ...a fearless pianist and harmonium player...